IAG announced the appointment of Terence Easton as its Chief Executive Officer. 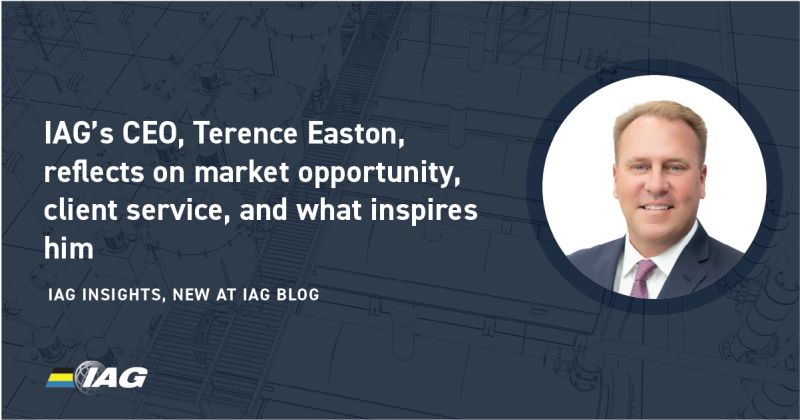 November 16, 2020 – Houston, Texas - IAG announced the appointment of Terence Easton as its Chief Executive Officer. Terence succeeds former IAG President, Paul Westberry, who will assume a position on the IAG board of directors and continue to support key customer relationships.

“Terence brings significant industry experience, strategic vision and a track record of successful leadership” says John Scott Arnoldy, IAG founder and Board Chairman. “He is well positioned to continue IAG’s growth given his deep understanding of the markets we’ve always served and enthusiasm for accelerating IAG’s growing presence in the renewables sector.”

“IAG was founded on the principles of innovation, agility and customer satisfaction,” says Terence. “I’m pleased to join a company with such a rich history, who’s business principles mirror my own. I’m also excited to be a part of IAG’s future, which has great potential.”

Terence began his career at Fluor as a project control specialist. As his career progressed, he was promoted to roles of increasing seniority, such as VP of Energy and Chemical Business Development, where he handled global business pursuits across the upstream, downstream and chemicals markets. In his final role at Fluor, Terence served as President of Infrastructure and Power, where he was responsible for driving global growth and performance of the division. Terence has an MBA from Villanova University, and a BA from San Diego State University.

IAG Rebrands the Company as “TritenIAG,” and Launches New Logo and Refreshed Website